A Midlife Crisis or a Moment of Sanity?

You know who they are:  your crazy aunt who is suddenly wearing mini-skirts and dying her hair three shades of magenta so she can fit in with her teenagers.  Your middle-aged boss whose seen having liquid lunches with one of the secretaries a few months before announcing his divorce.  Selling the house where you raised your children, so you can buy a bright red sports car or getting a face lift without telling anyone.  All are examples of midlife crises.

My husband and I were finally alone for the first time in our marriage (if you don’t know our story, I would suggest you read my four-part post entitled, “God’s work amongst the ashes”) .  It was Memorial Day weekend 2011, when my grown daughter Jess suggested we go to the Wisconsin Humane Society because she thought, “It will be fun to do something different and go see all the dogs while dad is at work.”

I am not going to state the obvious, since you are an intelligent audience.  Yes, after twenty years of saying “No” to dogs in my home, and after a lifetime of my sister’s being told by our mother, “No, we can’t keep that dog/duck/kitten/bird, because your sister (me) is allergic,” we walked out with a new addition to our family. 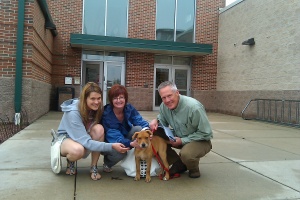 Hardy was the name he was given for the two days he was at the humane society.  A fitting name for a  6-week old, haggard looking puppy rescued when found wandering the streets in Arkansas after his home flooded during spring rains.  The van from Wisconsin loaded up 26 dogs the spring of 2011 from various areas of the south, bringing them all back to the Milwaukee area so that they could be spayed, neutered and adopted. 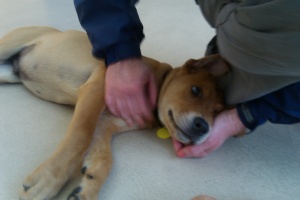 Hardy, who we later renamed Tanner, was labeled a Shepherd/hound mix – medium to big breed.  He was being treated for upper respiratory and urinary tract infections, and after the drive home, two ticks were discovered riding along in his ear.  I blame my nursing background, and big heart for taking on the challenge of a sickly puppy with post-traumatic stress disorder evidenced by diarrhea and vomiting in his new crate on the way home!

My husband Jeff grew up with dogs and although he would never admit it, my never wanting a dog, was probably the biggest strike against me when we met.  The day I had my midlife crisis was the best thing that ever happened to Jeff.  I, however, would continue to look like a deer caught in the headlights, shaking my head and saying, “What the hell did I just do?”

Our home was not “puppy proofed,” we spent hundreds of dollars on supplies and within two weeks of getting up in the middle of the night for “potty outside,” I was teary eyed and convinced Tanner would be going back to the pound.  I began to question daily whether I would be HARDY enough for this job! 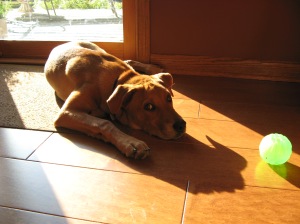 During one early morning training session however, I sat down on the floor trying to calm this frightened, hyperactive creature the same way I had done with my children twenty years before…I started to sing!  I held tight to Tanner’s growing like a weed body and  spindly legs, curling his back into my chest while rocking and signing, Hush Little Baby… 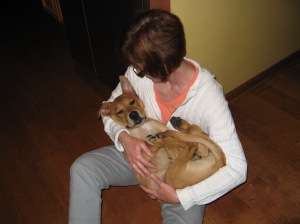 The results were magical.  My mothering instincts were rekindled and Tanner made a deep sigh and relaxed.  I think it was at that moment he began to trust that he was a part of a real home, with people who loved him, and I began to see the positive effect he had on me!

After we began to settle into a routine, I began to take my role as “Tanner’s mama” as seriously as I did raising my children.  We were consistent, socialized him around adults, children and other dogs, and invested a lot of time (and money) into training.  We have learned so much from our trainer Julie and although we are still working on bad habits such as rushing out the door to greet people who are trying to come in and barking frantically at every rabbit and squirrel that are on our property, Tanner is a wonderful dog.

When Tanner had his first birthday, we happened to be attending an Obedience class with ten other dogs.  Like any good parents, we provided all the dogs with party hats decorated with colorful paw prints, along with special canine ice cream treats  –  a great time was had by all! 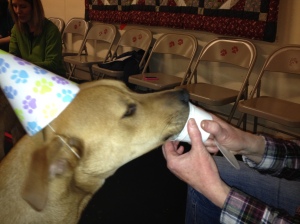 We have since learned a lot about Tanner’s breed, which we now believe is a Rhodesian Ridgeback/Hound mix.  He is full-grown at 66 pounds with a lean body and muscular long legs.  He runs faster than any dog I know, catches rabbits and voles if he gets a chance and is very intelligent.  This can be a good and bad thing, as he still requires a great deal of physical and mental stimulation and gets impatient if your schedule doesn’t allow for what he is intending.  But, like any good mama, I have learned how to avoid the “crazy puppy” episodes, and I have my daughter’s number on speed dial, since she is the one who got me into this!

Remember, there are certainly issues that arise for many of us as we enter middle age, or women enter menopause.  The phase in your life when regrets are revisited and mortality becomes even more real as we struggle with health issues, question our purpose or become caregivers for our parents.  But before you decide to drastically change your life or try to recapture your youth, would you please do me a favor?

Visit your nearest animal shelter first.  Adopting a pet has a lot less consequences than some of the other options and the benefits are great.  What a wonderful way to continue into the second half of your life with a special companion who makes you feel useful and loved unconditionally. 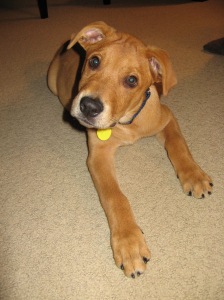 What is my only mid-life regret?  I should have gotten a dog (maybe not a puppy) sooner!

4 Responses to A Midlife Crisis or a Moment of Sanity?