Busting Through Life and Death

Anne sits in the upholstered arm-chair in the front row of the visitation room at the local funeral home.  Waiting for the funeral service to begin, she stares at the casket where a cascading blanket of red roses and her aunt’s picture rests.

The only child born to the oldest of six girls, Anne has already said “good-bye” to her mother and her other spinster aunts – her last aunt, Mary, being put to rest today.

It appears a traditional memorial that includes flowers, picture boards and personal mementos, until you see the bust – the upper torso of Richard Wagner, the German composer and conductor primarily known for his operas. 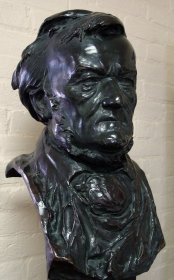 Although her aunts never marry, the family gets together often and the sisters are known for their pranks and their fun-loving spirits…that’s where the bust comes in!

Anne saw this bust of Wagner arriving at their home in a cab, the driver ringing her doorbell and announcing his arrival.  The bust travels in suitcases, going with one of the sisters on vacation, and has been a part of family holiday celebrations as well.

One of Anne’s earliest memories is listening to Wagner’s music in the candlelit parlor of her aunt’s Victorian home, the bust always present.

So, of course, it is front and center at the funeral home – accompanying the picture of Mary, the last of the siblings to pass.

The sisters’ playful nature and their love of this composer, prompts the organist to choose Wagner’s music as a prelude to the service.  His attempt to personalize the service after having heard the family’s story touches Anne’s heart and she gasps when recognizing the music selected.

These songs are synonymous with her memories of her mother and her mother’s siblings, the tunes familiar and soothing on this difficult day.

Memories flood her easily distracted mind and she finds herself asking – “Who takes care of Wagner now?  What will I do with this treasured bust?”

An entire generation of people is now gone and the pranksters’ beloved Wagner is left.  This humorous ritual is now a thing of the past, yet another loss for Anne.

The reality is that even if the next generation takes on the tradition, it will never be the same and history cannot always repeat itself.

Who knew that something so fun, a tradition so rooted within a family, could be the source of such grief after their death?

But that’s the nature of grief – reality blurs, emotions rise to the surface from oftentimes unusual and deep-seated places, and the survivors are left to do their grief work.

Work that could mean playing a Richard Wagner CD, lighting candles and making a toast to the composer who brought joy into the lives of spinster women!  Prost!